By Gabriela Perkins
0
0
Almost every automaker is launching at least one electric car this year. But, for the most part, they follow a theme. These are all single car designs. Primarily crossovers, they are meant to serve as daily drivers. They have seating for five, enough cargo space to haul a weekend’s worth of projects home from the hardware store, and enough luxury and tech features to impress a date.

In other words, you can buy one and have it serve as your only car. Range can be an issue on road trips, but many electric vehicle (EV) manufacturers are addressing this need by allowing you to borrow their gas-powered models for a set number of days per year as part of your purchase. .

What we haven’t seen yet is an electric vehicle built for the love of driving. Something that won’t work as a daily driver (unless your days are all carefree). But something beautiful, exhilarating to drive, and a bit impractical. The kind of car you want.

Polestar takes care of it.

In case you haven’t seen the ads after the Super Bowl, Polestar is an all-electric automaker that split from Volvo several years ago. It sees itself as a different company. Polestar publishes a carbon footprint for every car it builds and admits when they’re less than ideal. It aims to be carbon neutral without buying offsets – the trick most automakers use to make their emissions look better than they are. It pokes fun at Tesla CEP Elon Musk in its ads, saying it won’t waste energy focusing on Mars.

Polestar’s only product these days is the Polestar 2 – a car that fits neatly into the above description of catch-all electric vehicles.

But that’s planning something more inspiring and less practical. 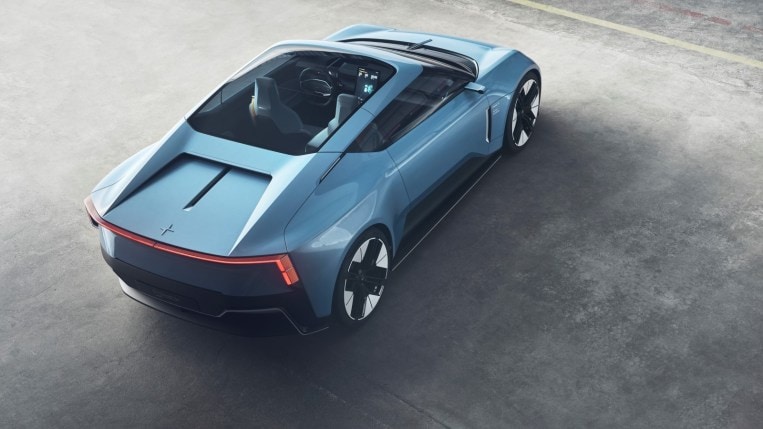 The automaker this week lifted the curtain on a concept car that may or may not be heading to production. Polestar calls it “a heroic car” for the brand – something like the 911 is for Porsche or the Corvette for Chevrolet. It’s called 02.

It looks a bit like a futuristic Nissan Z if Nissan decided to make it a hardtop convertible. Like classic Z cars, it sits on its haunches like a big cat ready to pounce. Its slash of a roof is mostly glass. There’s enough mass behind the seats to almost suggest its mid-engine.

But there is no motor. Polestar didn’t give any mechanical details about the car other than to say it’s fully electric. So we assume the undercarriage is completely flat under the floor, like most second-generation EVs. Polestar did not reveal range or power figures. Like most performance EVs, if Polestar were to build it, they would likely offer a rear-drive single-motor setup and a dual-motor option that powered all four wheels with one motor on each axle.

Built to be recycled

What the company will talk about is the design process. The O2 is at the forefront of new techniques in sustainable automotive construction. The aluminum structure is forged with renewable energies. Beyond that, each component is labeled with the grade of aluminum it contains, making the car easy to recycle at end of life.

Speaking of recycling, the seat foam and padding are all made from a single type of plastic. This, again, should simplify the recycling of the car at the end of its life.

Yes, he has his own drone The drone is a fanciful idea unlikely to go beyond the concept stage. But it shows what’s unique about the 02. While most EVs these days try to be everything for all potential buyers, the 02 is something different. It’s a car a kid might have wanted on a poster a generation ago.

It’s an EV, and one built with durability in mind. This makes it an effort to curb the excesses of the auto industry. But it’s also a painfully beautiful sunroof 2+2 – an effort to build a soulful car that no one would buy for practicality.

If the auto industry goes electric, it will have to build many heavy crossovers of the kind Americans love these days and run them on electricity. But we will also have to find a way to talk about our love of cars. The 02 could strike up that conversation like no midsize family hauler could. We hope to see it built as something more than a concept.