Why Israel wants Palestinians to have guns


In the mid-1990s, “Don’t give them guns! Was one of the most worn-out chants thrown at Prime Minister Yitzhak Rabin after he signed the Oslo accords with PLO President Yasser Arafat, helping to establish the Palestinian Authority and its foreign-funded security forces. While not the harshest of slogans – “Death to Arafat” and the classic “Death to the Arabs” topped the charts at the time – this particular line stuck with me. Many Israelis at the time were terrified that the weapons handed over to the Palestinians, the people they had violently oppressed for decades, would be turned against them. If only they knew.

During those years in Oslo, my friends and I would regularly listen to a song by Tupac which included the lyrics “Give ’em guns, step back, and watch’ em kill each other. Although the rapper was speaking of black communities in the United States, the words resonated with young Palestinians like us. At the time, my hometown of Lyd, a binational town in what is now central Israel, was in the midst of a crime epidemic and was described by the Israeli media and the Israeli police as the “Drug capital in the Middle East”. The city certainly had a lot of guns, and we were known for our very high murder rates. My childhood memories of the 90s are filled with painful stories of people who have lost friends and family. Later the inevitable happened and I too would have my own story.

As we get older, the story of the “gun infested” Palestinian community in Lyd, which continues to this day, became history of all Palestinian towns and villages in ’48 (Israel). Murder rates break records every year, with 80 Palestinian citizens killed so far since January, the vast majority by firearms. Gun Free Kitchen Table, a leading coalition working on this issue, estimates that Palestinian citizens today may have more unlicensed firearms – most of which come from IDF stockpiles – than those registered by the IDF, police, security companies and settlers combined (in 2013 these numbers were around 400,000 versus 330,000, respectively, and are certainly higher today).

The outbreak of this gun epidemic happened For a reason. Shocked by the mass protests of Palestinian citizens at the start of the Second Intifada in 2000 – in which the police beaten down 13 Palestinians in Israel and hundreds more injured – the Israeli establishment sought to counter the national uprising, and the threat of a future, by weakening the social fabric of the community. A key way to achieve this – much like with black communities in the United States – was to force Palestinian citizens of Israel to focus most of their energies on the interior. “social problems. “

Tens of thousands of Palestinian citizens of Israel, joined by Jewish activists, marched through the Palestinian town of Umm al-Fahem to protest Israeli police violence and organized crime on March 5, 2021 (Oren Ziv / Activestills)

In the following years, The Israeli police and intelligence services authorized and even fed an abundance of illegal firearms in these towns. Some policemen even started openly admit that they are unable to tackle violent gun crime today because many gun owners, including major criminal organizations, collaborate with and are “protected” by the Shin Bet. But the strategy has paid off: according to numerous polls in recent years, the number one Palestinian citizen political concern was not Israel’s occupation or its racist laws, but crime and gun violence in their towns and villages.

The idea of ​​putting weapons in the hands of Palestinians and “watching them kill each other” is also being applied forcefully in the West Bank. Under the terms of the Oslo Accords, the Palestinian Authority made a pact with the Israeli establishment to preserve what President Mahmoud Abbas has described as “sacred” security coordination: a system of collaboration that allows the Palestinian Authority and the Israeli military to stop, suppress and even kill any Palestinian perceived as a threat by Israel.

This pact is not only seen as a crime against Palestinian resistance; it is a humiliation of all the Palestinian people. I remember when, about 10 years ago, I went to Ramallah, West Bank, with my father to fix my beaten up old Peugeot. My father befriended a newly released Palestinian prisoner who was released from prison after 14 years. University and engineer who worked well with his hands, he decided to start his post-prison life by opening a car garage in Ramallah.

While we were chatting with him, we heard loud screams and noises outside. We looked out and saw a procession of Palestinian policemen speeding down the road, followed by Israeli army jeeps. They stopped right in front of us. The armed Palestinian officers remained in their vehicles, while Israeli soldiers stormed the neighboring building. 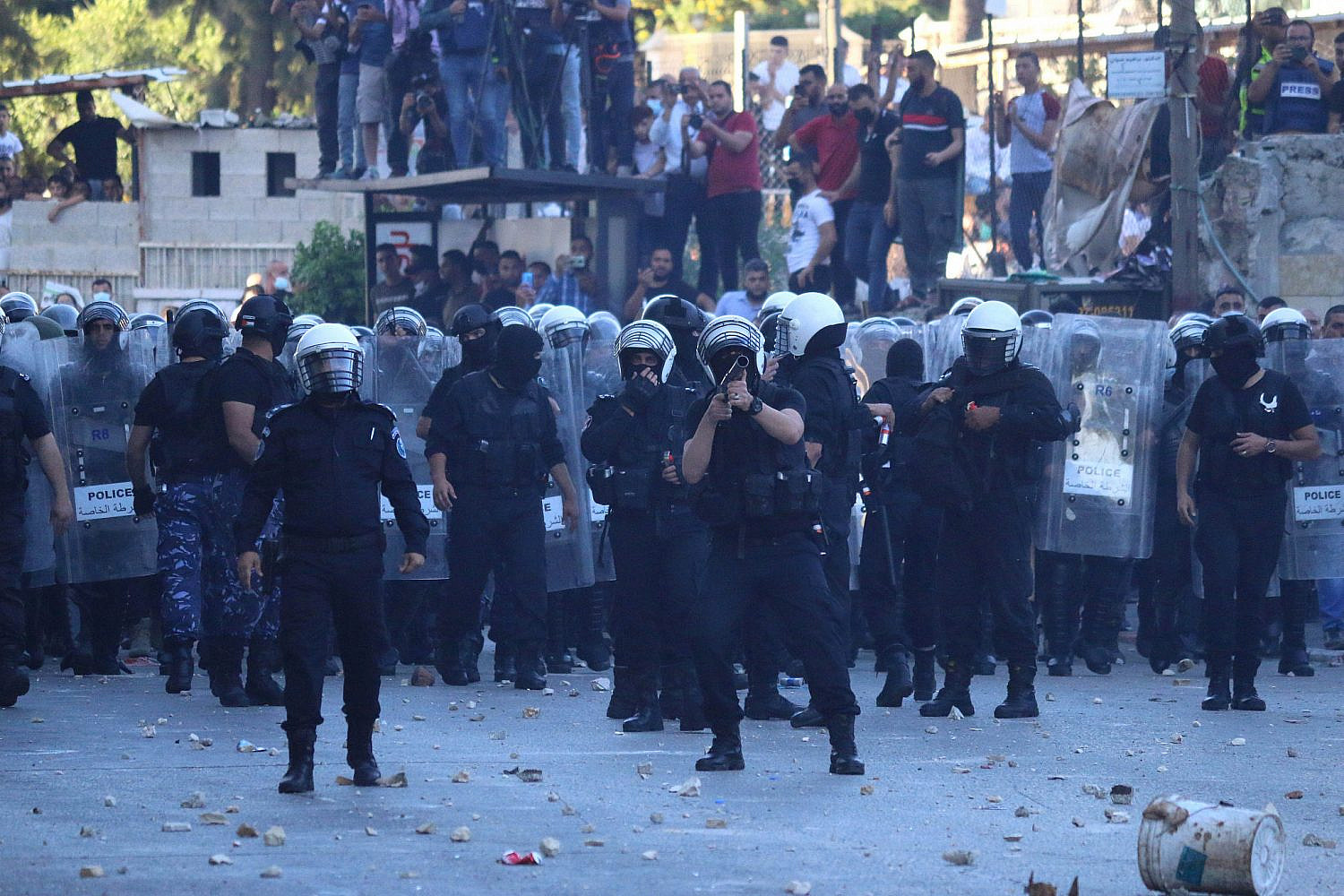 PA forces and Fatah loyalists, some of whom identified themselves as undercover security agents, attack Palestinians protesting the murder of Nizar Banat as they marched to PA headquarters in Ramallah, in the West Bank, June 26, 2021 (Activestills)

Our friend, the mechanic, stopped working on the car and walked quietly to the back room to hide, as if it was due process. Four minutes later, Israeli soldiers came out of the building with a young man in handcuffs and blindfolded. With the soldiers and officers out of sight, the mechanic silently returned to the workshop to resume work.

My father and I were there, speechless, in complete shock. Our friend was much calmer compared to my visible rage, but I knew what was going on in his head. “Sorry to be missing,” he said, taking my rear wheel apart, very calmly. “But that’s how my 14 years in Israeli prison began. My father thanked him and expressed his solidarity with some polite traditional Arabic phrases. But we knew we were all humbled, as Palestinians, that such a scene could take place in broad daylight in the middle of downtown Ramallah.

Just when we thought that the Palestinian Authority’s betrayal of its people could not get worse, their brutal behavior escalated. The assassination of activist Nizar Banat by Palestinian Authority forces two months ago has become the opening act of a mass detention campaign against anyone who criticizes Abbas and his cronies. Dozens of prominent figures – some of whom were former prisoners or administrative detainees in Israeli prisons, such as Khader Adnan – have been arrested by the Palestinian Authority, and many of them have been severely beaten. To add insult to injury, the Palestinian Authority even asked Israel for more “crowd control suppliesTo “quell protests” – code for more weapons to be fired against their own people.

Faced with local and international pressure, the PA announcement this week they indict 14 members of his security forces for their alleged involvement in Banat’s murder. But this show trial should not fool anyone: the Palestinian Authority has openly declared war on the Palestinian people. We used to say that the Palestinian Authority was operating as a “subcontractor” to the occupation, doing its dirty work in the West Bank. This formulation must be changed: the PA is not just a collaborator, it is the the occupation itself.

As crime in ’48 escalates and the PA becomes more open to who it truly serves and protects, I think back to that song of “Don’t give them arms!” And how Israelis sing a very different tune today. From Lyd to Ramallah, Palestinians who point their guns at other Palestinians – whether young people, criminal gangs, or security agents – are effectively acting as a direct weapon of the Israeli apartheid system, targeting their own people to keep the regime alive. If the Israelis had known in Oslo that the weapons they feared so much would be used for their own benefit, perhaps they would instead have sung Tupac’s line: “Give them weapons, step back and watch them go.” kill ”.

What will it take for this industry ...

The Basildon couple’s car blocked in a ...